Caribbean insiders with knowledge of Petion-Ville, Haiti might say that this wealthy suburb is becoming the apple of travelers’ eyes. Only a few years after a treacherous earthquake flattened Port-au-Prince and cholera began to spread through the country, a hotel boom in Petion-Ville has occurred – and wholesale vacation provider Apple Leisure Group wants to help the nation reposition itself as an elite destination.

Petion-Ville is a multi-racial hillside city of gated mansions, French restaurants and a vibrant nightlife. It’s about a 10 minute drive from downtown Port-au-Prince but, in terms of ambiance, affluence and security, it might as well be worlds away. In a country where most households lack running water, Petion-Ville is one attribute that helps put an Apple Leisure Group CEO’s vision of Haiti as a potential Bali seem within a somewhat believable reach.

“. . . I think Haiti provides a great opportunity,” Apple Leisure Group’s Alex Zozaya told Fox Business Network in late July. “It is a beautiful place, has an excellent location. We are trying to develop a destination within the destination. . . ”

Apple Leisure Group is headquartered in Newtown Square, Pa., and comprised of travel organizations that include a destination management company, a luxury resort sales, marketing and brand management company, a travel recognition and benefits program and an online travel agency. Apple Leisure Group’s plans for Haiti are still in their infancy, and yet the Best Western Premier Haiti and the Royal Oasis by Occidental have already opened for business in Petion-Ville. 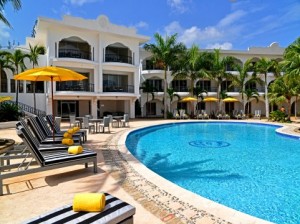 Petion-Ville is, perhaps, better known for its El Rancho hotel, which began life as the private estate of Haitian hotel industry pioneer Albert Silvera. The 4-star property re-opened in October 2013 after undergoing a post-2010 earthquake rebuild. The quake, a 7.0 on the Richter scale, sent a Petion-Ville hospital to crumbling to the ground. Haiti’s only golf course, located at the circa-1930s Club de Petionville, was transformed into a tent community for Haitians left homeless by the quake.

Club de Petionville sits just outside of the city of Petion-Ville. In addition to a nine-hole golf course, the club features swimming pools and tennis courts. An Irish Village with Irish Embassy Pub is relatively new Petion-Ville, and tourism to Haiti on the whole is on the rise. The Caribbean Tourism Organization reported that 299,646 stopover arrivals between January and September 2013 represented a 17.9 percent increase compared to the same period in 2012. The number of January-December cruise visitors also increased – from 609,930 in 2012 to 643,634 in 2013.

Originally inhabited by Taino Indians, Haiti was claimed by Christopher Columbus for Spain and was later provided to France, which named it Saint-Dominique. The country at different times has served as a pirate haven and a home to sugar plantations worked by African import slaves. In 1804, the country gained its independence and became the only nation in the world established as a result of a successful slave revolt.

Even with all the hype about Haiti’s tourism potential, travelers to the country are advised to exercise caution because of the potential, too, for becoming victim to violent crimes and food-, mosquito- and water-borne infectious diseases. UN Secretary-General Ban Ki-moon visited Haiti this summer to help launch a program to improve sanitation and fight the spread of cholera, and vaccinations for the disease are scheduled for August in Port-au-Prince.

The Embassy as late as March 2014 nevertheless advised that Haiti’s emergency management infrastructure remains inadequate and issued a warning that travelers purchase evacuation insurance and choose locales with solid infrastructure, evacuation, and medical support options in place. Hundreds of thousands of US citizens safely visit Haiti each year and violent crimes in the country have declined, according to the US Embassy, but violent crimes still occur particularly in Port-au-Prince. The nation also is located in an earthquake-prone region.

Haiti at a glance: