If Guadeloupe is the butterfly of the Caribbean, Marie-Galante is one of its eggs. The archipelago’s primary islands Grande-Terre and Basse-Terre form wings that flutter northwest, and this 61 square-mile isle sits beneath its belly. Because of its round shape and fairly flat terrain, however, Marie-Galante is known as “la grande galette” – the big cookie.

It’s one of Guadeloupe’s out-islands. (La Desirade to its north and Iles des Saintes to its west are the others). For those who want to unwind in a rural Caribbean atmosphere where straw hatted men transport sugarcane in oxcarts and fishermen work from Amerindian-style wooden rafts, how sweet Marie-Galante is. Nineteenth century windmills and plantation ruins dot rolling green hills. Grottos and caves boast primitive carvings and the brushstrokes of Mother Nature. Drivers yield to roosters and chickens crossing roads. The locals are soft spoken and kind.

As part of the French Caribbean and the Lesser Antilles, Marie-Galante has succeeded in preserving its authentic charm in part because of its political choices. Deforestation elsewhere in the Caribbean has caused soils to erode, and sugarcane crops that brought early wealth to these islands have given way to resorts and residences. But Marie-Galante has remained a French “department” or “region” that’s more financially dependent upon its mother country than it is on its own development. 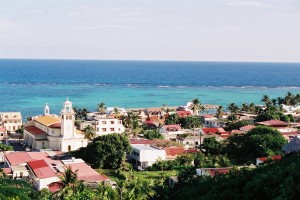 Here, 95 percent of the sugarcane harvest goes to a manufacturing mill and the rest to the Distilleries Poisson, Bellevue and Bielle in the community of Grand-Bourg. The sugar, aged in oak barrels for nearly a decade, is bottled as “rhum” – white and potent, with 59 percent alcohol by volume. Marie-Galante rhums are produced in limited quantities, and visitors can sample them while browsing pottery at a workshop at Distillerie Bielle or exploring historical artifacts at a Distillerie Poisson museum. For a non-alcoholic sampling of the island’s sugarcane products, visitors can head for Les Délices de Siblet, a Saint-Louis factory that produces a “Sirop de Batterie” that locals use to sweeten their ti punch. Workers package the syrup in full or half-liter bottles for purchase.

Marie-Galante is a 45-minute ferry ride and 15-minute flight from Guadeloupe. A Creole Blues Festival aside, June through October is the quietest time to visit, and lodging based on double occupancy can start at about $50 USD nightly. French is the primary language, the euro the accepted currency. Some hotels and exchange bureaus can exchange US dollars, but ATM cards make the process easier.

Development on this island of about 12,000 people is light and concentrated in the towns of Capesterre, Grand-Bourg and Saint-Louis, situated south, west and northwest respectively. A couple of dozen wind turbines on Morne Rita (Rita Hill) in Capesterre power about one-third of the island, and travelers should plan on bringing adapters and converters for electronics and laptops that call for more than the island’s 220 volt/50 cycle power.

Grottos and caves such as this area’s LaGrotte du Morne Rita – carved with petroglyphs, pictographs, or more simply, rock art – are abundant. The salty, sometimes formidible sea, on the other hand, has sculpted Les Galeries at Capesterre. At Le Trou a Diable grotto, a guide provides tours of an underground river.

There are several white sand beaches on Marie-Galante, but Petite-Anse in Capesterre and Anse de Vieux Fort in Saint-Louis are probably two of the best known. Beachgoers at Petite-Anse, popular with weekend warriors, can pull up a seat in the sand at Le Touloulou and feast on Creole and seafood specialties such as langouste (lobster). Anse de Vieux Fort in Saint-Louis borders the fresh water River de Vieux Fort that can be paddled on kayak or canoe. A path through a forest in this area leads to the site where France’s 18th century Canonniers-Bombardiers de la Marine were stationed during their fight to keep profitable sugar islands like this one from British control. 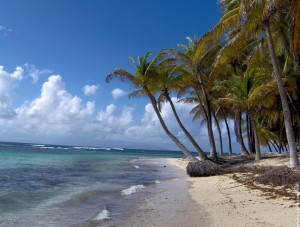 Toward the northeast of Saint-Louis is Guele Grand Gouffre, a collapsed cave that arches over the sea, and Caye Plate, a cliff that reaches 400 feet above sea level. Marie-Galante is otherwise relatively flat.

Like other Caribbean islands, this one formed when plates within the earth collided, descended into its mantel, mixed with ultra-hot magma, erupted and surfaced. But Marie-Galante, along with the rest of the Lesser Antilles, is part of an outer arc along the plate’s boundary that’s older than the inner arc of the Greater Antilles. This outer arc surfaced, submerged and surfaced again. By then, warm salty waters had transformed the land into limestone, reduced the size of its hills.

Christopher Columbus discovered Marie-Galante on November 3, 1493 and named it after the flagship of his fleet, the Santa Maria. The island’s earliest known inhabitants, the Huecoides, are thought to have been followed by the Arawaks who named the island Touloukaera and then the Caribs, who called it Aichi.

By 1635, the French had claimed Guadeloupe and, as Guadeloupe and other islands became overpopulated, they spread to locales such as Marie-Galante, battling Carib inhabitants for years. France annexed Guadeloupe in 1674 and focused on organized farming that intensified when Dutch vessels brought some 80,000 African slaves to the islands. The French, English, Dutch and Spanish then spent decades during the 18th century battling over territory and wealth.

How Sweet It Is

The United States has since claimed a Caribbean presence, and Spain has bowed out. On Marie-Galante, visitors each March can get a feel for the area’s rich sugar heritage. That’s when the 100-day harvest begins, and the island’s Grande Anse factory near Grand-Bourg comes to life. The Murat Plantation in this same area, once the largest plantation in Guadeloupe, is now an eco-museum showcasing the area’s sugar refinery history and boasting medicinal plant garden and slave housing.

The Roussel-Trianon and Pirogue plantations in Grand-Bourg also played an important role on this “sugar island.” A national road replaced the Pirogue windmill, and a pond at the site during an 1849 elections uprising became a rum and sugar dumping ground when protesters accused wealthy white plantation owners of ballot rigging. Many people died, and the pond became known as La Mare au Punch, or the Punch Pond.

A circa-1814 windmill at the Murat Plantation in Grand-Bourg and the open-to-the-public Moulin de Bézard nearer Capesterre are two of 72 windmills on Marie-Galante. The island, known also as the Island of 100 Windmills, in 1830 boasted more than 100 of the structures – some of them oxen-drawn and some serving as sugar refineries later replaced by in-factory machines.